skip to main | skip to sidebar

Purple Beads Always Work...Even if It's Not as You Originally Intended! 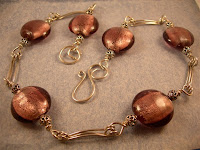 This September I had a flurry of jewelry making and quilt making (nothing finished in the quilt arena yet...all still in progress). This is mainly because my studio is sooooo hot in the summer even with the air on that I don't do a lot of quilting or jewelry making then. But come September's crisper nights and cooler days I have returned to my studio again! I missed it!

Upon returning to my studio this is the first jewelry piece I made. It is a Purple Metallic Foil Lampwork bead (maker unknown) and Argentium Silver Necklace. The Design inspiration is from Kerry Bogert's bracelet in the book "Wire Style" 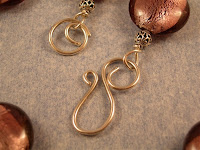 by Denise Peck. I originally wanted to make a bracelet too, but I wanted to use more beads than the original design's three. So I shortened up the wires a bit and played. What I found was that this bracelet didn't wear well along the curvature of my wrist and in fact I don't think the original design would have either. It was so pretty though, so I was going to use it come heck or high water! I lengthened it figuring it would wear well as a necklace. I was right. This necklace wears so nicely and has weight but isn't heavy. It is bold 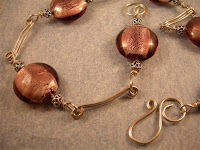 and makes a statement but isn't over the top. I love it and wear it often and it receives compliments often. I wish I remembered where I got those beads because they are amazing!

Melissa, your necklace turned out beautiful. On my screen, it looks like gold wire with amber beads!

A little tip, if you need some more length in the bracelet version, make the ribbon style links longer and bend then against your wrist to get just the right bend on them.

Followers of My Blog!

About "The Wired Quilter"

Melissa in NJ
South Jersey, United States
Hi! My name is Melissa Sutton Boos and I live in South Jersey. I have been quilting since 2001 and jewelry making since 2007. I recently stepped down as President of the 501(c)3 eductiaonl charity Love Apple Quilters Guild after two years in office. I have been crafting practically from the womb trying just about everything. That explains my love of quilting and my recent foray into wire jewelry making. Although I love all crafts, these two are my current passions...hence the name of this blog. Thank you for reading! P.S. If you'd like to see ALL of my creations to date please click here to browse my full catalog of photographs.